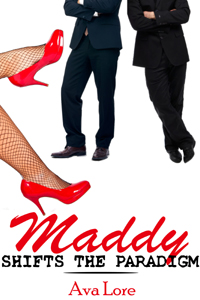 I’m happy to announce that Maddy Shifts the Paradigm, the third and, for now, final installment in the Maddy series, is now live at major retailers! Buy on Amazon Buy on Smashwords Buy on Kobo Buy on AllRomanceeBooks Will be up at Barnes and Noble soon!

It’s been a week since Maddy negotiated the merger between Chet and Sam, and neither of them have called–typical. Then a series of gifts show up on Maddy’s desk, each with a cryptic note inside. Was her fling with the two hot founders of her company a one-time thing, or could Sam and Chet possibly want more? This 12,000 word short story is a stand-alone sequel to Maddy Takes a Memo and Maddy Calls A Meeting and contains capitalism run amok, man-on-man action, a curvy heroine who knows exactly what she wants, and three-way to knock your socks off! EXCERPT: Next to her, Chet laughed. His voice, rich and deep, warmed her. “Sam was very worried he wouldn’t be good in bed,” he said. “Chet!” Sam sounded horrified. “What? She was going to find out at some point. That’s what a relationship is. Knowing all the dirty little secrets of your partner. Or partners.” He paused. “He is good in bed,” he conceded. “It just took a little practice.” “You dick!” Sam sounded apoplectic. Maddy reached out and put a hand on his knee. “Don’t worry,” she said. “I’m sure you are great in bed.” Sam looked pained. “Wouldn’t you know?” he said. “You’ve slept with me.” Maddy patted him. “There, there,” she said. Chet laughed. “Maddy, you really are a wrecking ball.” And then his hand was on her cheek, pulling her away from Sam and toward him. His face loomed, his icy blue eyes piercing hers. Waves of dizziness lapped at her as he drew closer and closer, and then his lips were on hers and the undertow reached out and grabbed her, pulling her under. Shivers raced over her skin where they touched, his mouth nibbling and tasting, hungry and seeking. Behind her, Sam’s hands went around her waist, kneading and massaging her hips as he leaned in and planted a kiss on her ear. Tremors of pleasure shimmied under her skin, and Maddy felt herself pulled further and futher under by the fantasy of the three of them. Could she really have it all? Could she risk her heart on two men, not just one? They wanted to try it. They wanted to be with her. But what if it didn’t work out? What kind of terrible fallout would knock her life off its course?…

I have to admit, the fantasy of being in a relationship with two hot, rich guys is really tempting, but I’m guessing in the real world it’d be one of those things that just ends in tears. Too bad for all of us we’ll just have to drool over the Sam and Chet duos of the world from the safety of our armchairs… *sigh*

2 thoughts on “Maddy Shifts the Paradigm — OUT NOW!”