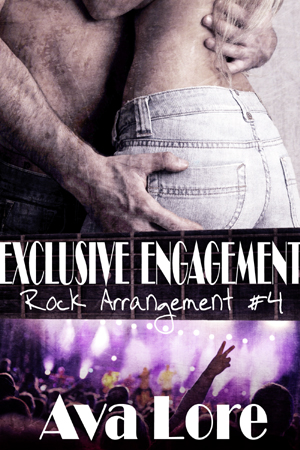 Faced with scandal, can Rebecca bring herself to trust Kent to help her eject her abusive ex-boyfriend from her life forever? And even if the threat is gone, will they be able to start over after such a tumultuous beginning? Exclusive Engagement is 20,000 words and is the final book in the serial novel Rock Arrangement. Only $2.99! Available now at these major retailers: Amazon Barnes & Noble  Kobo Books All Romance eBooks A note from Ava: Thank you for bearing with me. This installment was very hard to write because I didn’t really want to leave this world and these characters. I must have started over at least five times! But here it is, and it’s finished. It has been a privilege to share this story with all of you, and thank you so much for reading! A cleaned up New Adult version of this book will be released under the title Hard Rock Arrangement in the near future, and look forward to Carter’s novel, Hard Rock Remix, in September! I’m starting a more angsty and slightly less explicit New Adult/YA penname at the end of June, so if that’s your thing, I hope you will follow my other books, too. If you want to know when I start my new penname, please sign up for my update list here or my newsletter here. 😉 All the best, Ava Lore edit: I am also truly humbled by how many people loved this series and how absurdly popular (by my modest standards) it became. Thank you, thank you. Excerpt: He stood up and helped me to my feet, then led me into the hall. Together we wound through the cold, white, corridors of the backstage area before reaching a dingy door. Kent pulled me through it and into the club proper. I was certain we’d be noticed. Kent was not the sort of guy who went incognito easily, but to my shock no one looked twice at him and I realized that no one would be expecting to see him in the crowd at his own concert. Besides, the inside of the Snake Pit was so dim and dark that I could barely tell who he was, and I was holding his damn hand. We circled around the back of the crowd, as unobtrusively as possible, before Kent found a spot against one of the pillars holding up the roof that remained unoccupied. Leaning against it, he pulled me to him, dragging my body into the cradle of his own, curving around me. My ass pressed against his crotch, and as we stood there in the dark, waiting for the show to start, he ran his hands over my body with a lazy, deliberate air, and I felt his cock begin to harden against my backside. My breathing picked up. We were out in the open, out in public, and yet shrouded in anonymity. Rough fingers slid under the hem of my shirt and skated over the skin of my stomach, dipping into the waistband of my jeans. My back arched, pressing my ass against his erection, and he leaned down and hissed in my ear. “If you don’t stop that, I’m going to take you out back and fuck you in the alleyway, and you’ll miss the whole show.” His hot breath sent shivers down my spine. My knees turned to jelly and the space between my legs ached. It occurred to me that I would probably prefer that outcome. I circled my hips, grinding into him…