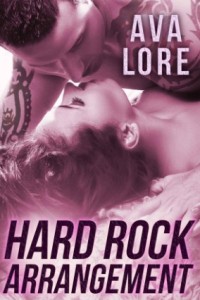 By Ava Lore
Tagged: Hard Rock Arrangement, The Lonely Kings #1
Amazon B&N Kobo All Romance eBooks
Chronic loser Rebecca Alton is penniless, homeless, and sleeping on her sister’s couch. She needs a job, fast, but in this economy finding one is easier said than done. When she accidentally walks into the wrong office and finds herself auditioning for the role of fake girlfriend and very real babysitter to Carter Hudson, the out-of-control lead guitarist of an up and coming rock band, can she pull it off? And considering who her boss would be–Carter’s brother and the band’s bassist, manager, and undisputed king of bad attitudes Kent Hudson–would she even want the job? Rebecca isn’t sure. In fact, she’s not sure of much in her life, except three things: Kent wants her, she wants him back, and the underlying animal attraction between them may be too white-hot to keep under wraps.