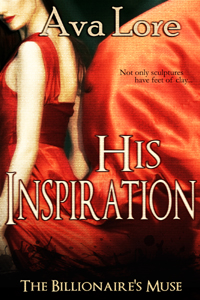 His Inspiration (The Billionaire’s Muse #3):

Not only sculptures have feet of clay… Swept off her feet to a far off place, Sadie is happy to give herself over to Malcolm’s pleasure–and the pleasure he gives her in return is more than enough. But it isn’t long before the real world intrudes on their happiness, and Sadie is in for a shock when she learns just why Malcolm revels in his eccentricity… and discovers the darker side of his whimsy. His Inspiration is a 16,000 word novelette. Part three of five in The Billionaire’s Muse series. Only $2.99! Available now at these major retailers: Amazon Barnes & Noble Kobo Books All Romance eBooks Smashwords EXCERPT:
Smears of color covered my skin, making me look like I’d rolled in a Jackson Pollack painting. Malcolm sat in one of the leatherbound swiveling chairs, watching me. “You are startling,” he said when I finally stood before him, completely nude except for his own markings.
“Thank you,” I said. “Don’t speak.” I licked my lips. “Lie down on the floor,” he commanded. I glanced down dubiously at the fine carpet. Wouldn’t the paint ruin it? But hey, I wasn’t a freaking billionaire, what did I care? I did as he bade, stretching out, my arms above my head, my toes pointed towards him. “Open your legs,” he said. Then he reached down and opened a bag I hadn’t seen there, withdrawing a familiar-looking tin. A box full of charcoal sticks. “Where’d you get that?” I said. “What did I say about speaking?” he asked me. I clammed up. “Spread your legs,” he commanded again. God. I’d never known how much I liked to hear a man talk dirty to me. My breathing picked up as I let my thighs fall open, exposing my inner flesh to his gaze. “Yes,” he murmured. “Like that.” And he left his chair and knelt down between my legs as he opened the tin of charcoal. I wanted to ask what he was going to do. I didn’t think he’d be so amateur as to stick charcoal inside me, but you never knew with some people. He didn’t though. Instead, he took one stick of charcoal out and held it lightly, poised to draw on my skin. Tilting his head to one side, he took me in. “You aren’t finished yet,” he said, more to himself than to me. “But how will I know when enough is enough?” I could have told him that sometimes you never do, but then he lowered the charcoal to my belly and began to write.

4 thoughts on “His Inspiration — Out Now!”