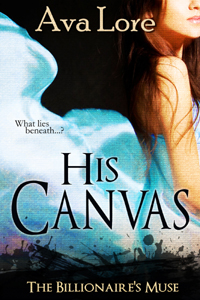 Sadie isn’t certain what to make of Malcolm Ward, but it seems no one is. Intrigued and intensely attracted, Sadie decides to spend more time with him to get to the bottom of things. But when he invites her again into his studio, this time using her very body as the medium with which to express himself, it’s Malcolm who starts to uncover parts of Sadie that she would rather leave buried… His Canvas is a 16,000 word novelette. Part two of five in The Billionaire’s Muse series. Only $2.99! Available at:
Amazon Barnes & Noble (coming soon!) Kobo Books
All Romance eBooks
Smashwords EXCERPT: I let my gaze slide down so I could study him from the corner of my eye. He wasn’t wearing the same clothes I’d last seen him in; instead of pajamas he now wore a fine cashmere sweater and well-tailored slacks, though his feet were stockinged. A pair of fine shoes languished a few feet from the desk, as though he’d brought them over, meaning to put them on but had forgotten to do so. He’d also shaved, so that was good. It meant he’d probably taken a shower. He still seemed a bit off, though. He had a strange, hunted look on his face, as though he hadn’t slept, dogged by some unrelenting compulsion. Glancing back at the images on the screen and his riveted attention to them, I could believe it.  “Some of these are pretty good,” I told him. “I mean, considering your subject matter and all.” Next to me, he shook his head. “That’s kind of you,” he said. “But it’s not here.” I blinked. “What’s not here?” “My masterpiece.” I felt my mouth twist. “You don’t think so? You asked me over to look at your photos as a professional. I think they’re pretty good. You have talent. And I’m admitting that grudgingly considering you didn’t decide to become an artist until yesterday.” “Two days ago,” he corrected me, “and that was just an excuse. I asked you over to do this again.” I could see it all in my mind as he moved the mouse down to the lower bar of his photo editor, clicked on a box, and up popped the picture of him between my legs, eyes half-closed with ecstasy as he laved my clit with his tongue. Just the sight of it made me aching and empty for his cock, even as my face flushed with humiliation. And yet the picture I’d taken was beautiful, in a purely artistic sense. I’d captured my subject perfectly: the only thing truly in focus was Malcolm’s face. The face of a cat lapping at a bowl of cream. I still wasn’t entirely prepared when he turned his chair and gripped my hips gently to pull me to him. “Whoah!” I said, my hands flying out to grab his shoulders. “I… uh…” My brain shorted out as my fingers met his body. He was well-muscled. Very well-muscled. And hot. He burned through his sweater and undershirt. Burned for me. I’d worn a skirt. A heavy wool skirt. No tights. He stared up at me with his beautiful, intense eyes as his large warm hands smoothed over my hips to my ass, squeezing gently. His lips, level with my breasts, were thwarted only by the thick coat I wore. He didn’t seem to care. “You’ve been on my mind since I saw you,” he said, his voice thick and husky. “But I haven’t captured you yet.”