Ugh, I just had to share this cover with y’all ‘cos it turned out great. I mean, super great. I love it. 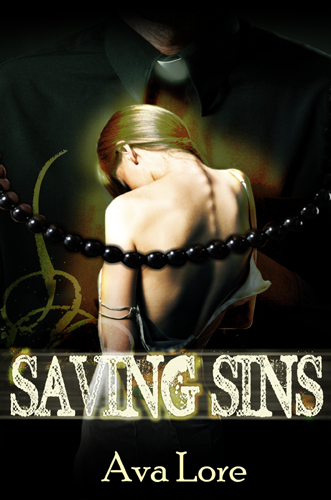 Saving Sins. The story of a strung-out street kid and the priest who saved her. And the angsty sex they had years later.

…Like no, seriously. I hope you guys like some existential despair with your sex, because this story turned out to be mostly angst with unresolved sexual tension up until the point where it became very resolved. Will be out in the next few days. Have a teaser:

She didn’t want to see Father Michael all of a sudden. He had to care about her. It was his job. His calling. She didn’t want to be anyone’s job. Her mother had made it clear just how much of a problem she was. Slamming her hands into the glass door, she burst into the cold night. The air slapped her face, and she wanted to run and run and run. “Tara!” His voice behind her. She picked up her pace. She couldn’t catch her breath. She couldn’t see straight. They were in a weird part of town. She didn’t even know which way was home, or what home was, or if she wanted to go back to any home she had ever known. She just wanted to crawl under a rock and sleep away the fear. He caught up with her behind the restaurant, just before she managed to slip behind the broken fence and into the alleyway of some low-rent neighborhood. “Tara,” he said, and his hand landed on her shoulder. She whirled around. “What do you want?” she said. She meant it to come out defiant, but it just came out small and shattered. The moon was full above them, and the wind rustled in the branches of the trees in the alleyway behind them. The world was turning toward winter, and the leaves were falling. He was so beautiful in the moonlight. She wanted to throw herself into him, let him hold her up. She was tired, and tired of running. She wanted to worm her way into his clothes, draw strength from his warmth, fill herself up with him, feel alive, feel wanted, feel loved. He was full of love. But she didn’t know how to accept it. Like a vase, broken and badly repaired, she couldn’t hold what he wanted to give her, could only take what he couldn’t give. Her mother’s boyfriend had seen to that. “I’m sorry,” she said again. “So am I,” he said, and then he was reaching for her, his arms sliding around her shoulders… It was a mistake. A slip. She shouldn’t have lifted her face to his. She shouldn’t have crossed that gap between them. But she did. Her mouth met his, and fire consumed her. Oh, he tasted good. His body beneath his coat, beneath those strict black clothes, was hard and hot, a lean, demanding thing that she knew would fill the ache inside her, the emptiness. His lips on hers weren’t even hesitant, were demanding, seeking, as though he, too, were in danger of drowning in all the sadnesses of the world. Her fingers curled in the fabric of his shirt, his coat slid over her arms, and his hands dug into her back, lifting her up into him. His tongue sought her, demanded entrance, and she opened her mouth. He tasted of coffee and grief, and she tried to swallow it down. He shouldn’t feel sad. He shouldn’t feel anything except calm and kind. She had made him sad. She made him worry. She couldn’t stand it. Their tongues danced together, frantic, striving. Teeth clicked, and her arms were around his waist, pulling him into her. The long, hard length of his erection swelled against her stomach. She wanted nothing more than to take him inside. She needed him, and he needed her. His body, his desperate kiss were enough to tell her that.